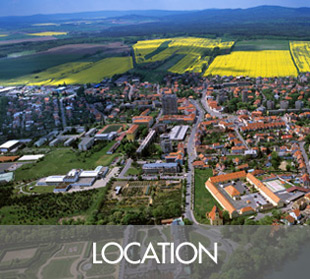 Sightseeing in the region

In the Neo-Renaissance chateau, built in 1878 by Dvořák's brother-in-law, Count Václav Kounic in Vysoké, you can visit Antonín Dvořák Monument. The chateau building is in the middle of a large park, and nearby there is Rusalka Lake, the place of Dvorak's inspiration to one of his most famous operas. In 1994, after the end of demanding reconstruction, a new exhibition was opened. Its historical part will bring you closer to the personalities of Kounic's spouses, the second, more extensive, gives information about Antonin Dvorak's life, work and stay in Vysoká. The concert room, the library and the gallery of Václav Kounice are newly created in the chateau for seasonal exhibitions. In 1997, Antonín Dvořák Memorial won the awards by participating in the final of the European Museum of the Year award.

The Museum of Mining 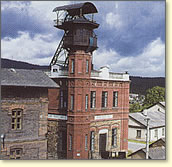 When you go through Příbram, do not miss a visit to the Mining Museum in Březová Hora, the largest mining museum in the Czech Republic.
The museum is situated in the grounds of the historic Ševčin shaft, in the original mining buildings of the Vojtěch mine and Anna mine. Expositions document local mining and metallurgical activities from the prehistoric times to the end of mining operations at present. From the courtyard of the Anna mine, you can visit not only the engine room and the cauldron, but you can enter the underground straight from the courtyard and walk through or go through Prokopská shaft by the mining train. This shaft leads you to the mouth of the Prokop pit from 1832, the deepest shaft of the Březohorský hounting ground (1600 m),and one of the deepest in Central Europe. From the Anna mine you can reach the Vojtěch Mine through 330 m long water gallery Anna from the end of the 18th century.
The tour ends near the original mining pub Na vršíčku, which offers restaurant services in a stylish setting. 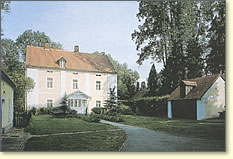 In the historical area, where iron ore was processed in the 19th century, there is a memorial to Karel Čapek. After the First World War, Colonel-Mansfeld's real estate was acquired by Václav Palivec, who in 1935 gave this empire style house as a wedding gift to Karel Čapek and Olga Scheinpflug. At Strž, as Karel Čapek named his summer residence, many literary works were also created.
The new exhibition, opened in 1997, is dedicated to the personality and work of Karel Čapek and his wife, actress and writer Olga Scheinpflugová. Since 1998, there has been also an independent exhibition of the journalist and writer Ferdinand Peroutka in the attic of the house. The surroundings of the monument are distinguished by natural beauty and are the destination of hiking trails. 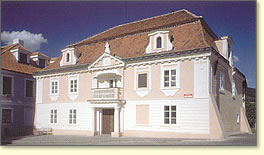 The former royal gold town is situated on the Kocába River and the adjacent hill. History goes deep into the past and has been associated primarily with gold mining in the town and its surroundings. In Nový knín you will find a large number of listed buildings, including the Church of St. Mikuláš at Jiřího z Poděbrad square, which forms the dominant of the town and whose origins date back to the 12th century and the object called the "Mint", the original seat of the Purkmistrian office. The first mention of it come from 1464. At present, the building floor is used as the Museum of Gold Mining and Processing in the area of Nový Knín, where you can learn about the rich history of the town, closely connected with the mining of gold in Nový Knín and its surroundings.